Italy has many family-owned businesses, but many of them remain private and not public. The result is, in our opinion, a slightly “boring” stock market where the majority of the companies are banks, utilities, or insurance businesses. For example, there is a lack of technology companies.

We emphasize the article is not a recommendation to buy the mentioned companies. Please do your own due diligence. The aim of the article is to give some inputs/suggestions for companies to study in more detail. This article is a work in progress. We add more companies as we find interesting candidates.

Why dividend stocks? When a company pays a steady dividend it can serve as a useful heuristic for where to find good companies. A company is not able to pay a dividend unless its business throws off a considerable amount of cash. However, compared to many other Western stock markets, the stable dividend-payers are far between in Italy.

Previous articles in this dividend series:

Why invest in dividend stocks?

We have written numerous articles about dividend investing, both for and against. For a complete list of the articles, please look at our landing page:

Get Our Articles In Your Mailbox:

Yes, I Want The Newsletter!

We would also give you a friendly reminder about the seven different model portfolios we offer, both dividend and non-dividend stocks:

Only the UK, Hong Kong, and Singapore have zero withholding taxes. The withholding tax is a tax paid on distributions to non-resident shareholders and is in reality double taxation of the already taxed profits at the company level. Italy withholds 26% at source, ie. only 74% of the dividend is transferred to the shareholder. If the shareholder is a resident of a country that has a double taxation agreement with Italy, a lower rate of 15% can be applied.

Are there any Italian dividend aristocrats?

The complete list of the best Italian dividend stocks:

The companies are listed in alphabetical order:

Amplifion is one of the world’s biggest producers of hearing aids with a market share of about 12%. The dividend has been raised or kept steady since 2010, but the BoD chose to err on the safe side and canceled the dividend for 2019 due to Covid-19. The payout ratio has historically been around 30% and we expect the dividend to resume.

Brunello is a fashion designer still controlled and managed by the founder (the company is renamed after him). 20% of the profits are dedicated to charity. A dividend has been paid since 2012 and raised every year.

We assume the product Campari needs little presentation. Despite its bitter taste, Campari has become one of the world’s biggest brands in the alcohol business. Perhaps lesser known for foreign investors is that Campari owns about 50 brands. The best-known brands in addition to Campari are Aperol, Wild Turkey, and Grand Marnier.

Alcohol stocks have been one of the best industries in the US over the last century, while it has been the best in the UK. Alcohol is unlikely to get disrupted.

Campari’s dividend has been held steady or increased every year since 2001. The dividend growth has been 5% annually over this period. The policy is to “fix” the dividend for some years before it’s raised.

Cerved is an information provider and rating agency, mainly for the Italian market, where it has been a market leader for over 40 years. Cerved’s dividend has mostly been raised, but the BoD chose to cancel the dividend for 2019 due to Covid-19.

De’Longhi is an industrial manufacturing group, perhaps best known for their coffee machines, however, it makes many other home appliances. A dividend has been paid every year until 2019 when the BoD wanted to be cautious and not pay a dividend. The dividend was increased from 3 cents in 2001 to 100 cents in 2008.

Diasorin is a diagnostic company, mainly for infectious diseases, but also for many other types.

DiaSorin’s dividend has been increased every year since 2009, except for 2018.

ENI is one of the world’s few “supermajors”, ie. a vertically integrated oil company. All oil companies are dependent on the very volatile oil price, and thus it’s difficult to keep a steady dividend. The Italian government owns a significant stake in the company.

The dividend is based on several factors, too detailed to be explained here, but explained on their website. ENI’s dividend has been paid every year since at least 1995 but has mostly been held steady with no growth at all.

Exor is an investment company controlled by the Italian Agnelli family. The current portfolio of companies looks like this:

Exor has no specific dividend policy but pays an annual dividend. The dividend has increased from 0.319 in 2009 to 0.43 in 2020. It has been kept steady or increased every year except 2010 when it was slightly lowered.

We assume Ferrari needs no introduction as one of the world’s premier car brands. Ferrari’s dividend only goes back to 2016 and has been increased every year except for 2020 when it was slightly lowered.

Generali is a financial company where main activity is insurance, mainly life insurance and P&C. The main market is, of course, Italy, but about 55% of the sales derive outside Italy, mainly in Europe. Apart from insurance, Generali aims to increase its presence in the asset and wealth management business.

A dividend has been paid every year since 1945.

Hera is a diversified utility company. The segments are waste management, water distribution, gas distribution, and sales of electricity.

Hera’s dividend has hovered between 9 and 10 over the last decade.

Monclear is a fashion brand mostly known for its skiwear and was listed as recently as 2013. The company has witnessed strong growth in sales and profitability and thus managed to pay an annual dividend since its listing.  The dividend in 2013 was ten cents, while in 2018 it was 40 cents. However, due to Covid-19, the dividend was canceled for 2019 but will later resume.

Prysmian manufactures electric power transmissions, cables, and systems. Most of the revenue is derived in Europe, but sales come from all corners of the world.

The dividend is paid annually, and shows a steady increase over the years, despite being lowered a few times.

Recordati is a pharmaceutical company specializing in rare diseases. Most of the income derives from Italy, but it has operations on all continents. It’s a relatively small company with an annual turnover of 1.2 billion EUR.

Recordati is one of the few Italian companies that pay a dividend twice a year: an interim dividend and a bigger final dividend. The dividend is raised from 0.125 cents in 2005 to 1 EUR for 2019. It has been raised every year except for 2012 when it was kept steady at 0.3 EUR.

Reply is an IT company that does digital services like big data and analytics, cloud computing, CRM, Digital communication, e-commerce, IoT, Mobile payment etc. Like many IT companies, it has witnessed strong growth over the last decade. The growth has made Reply grow the dividend every year since 2010 from ten cents to the latest 52 cents.

Salvatore Ferragamo is an Italian fashion company in footwear, clothes, accessories, perfumes, jewelry, and eyewear. The growth has been steady up until 2017 when it flattened. A dividend has been paid since 2012 with an increase every year except for 2018 when it was lowered.

Snam is an energy infrastructure company spun off from Eni. The largest shareholder is the Italian state. It owns almost all gas pipelines in Italy, in addition to pipelines in other parts of the world.

Snam has paid a dividend every year since 2001 when the euro was introduced, increased 5% annually over the period. You can expect reductions along the way. The aim until 2022 is to grow the dividend by 5% annually, and 2.5 for 2023 and 2024.

Tamburi is an investment bank founded in 1999 and still controlled by the founder. It was listed in 2005 and has paid a dividend every year since its listing. Tamburi’s dividend has not always been raised, but over the 15 year period is has gradually increased from 2.5 cents to 9 cents. 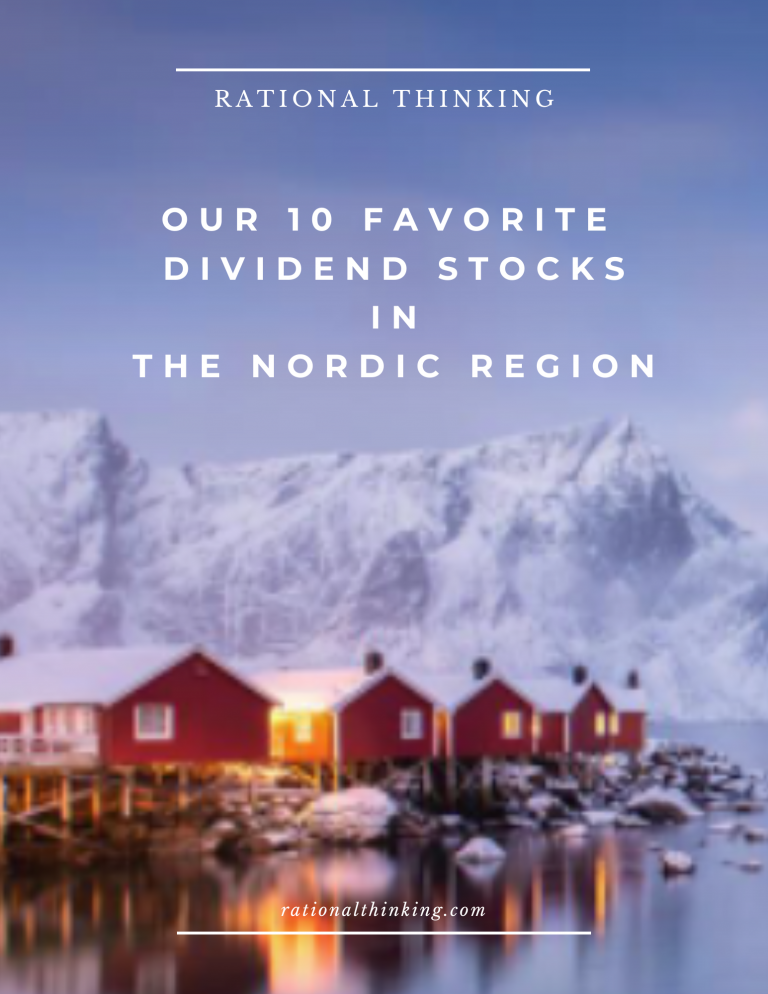 Please log in again. The login page will open in a new tab. After logging in you can close it and return to this page.

This website uses cookies to improve your experience while you navigate through the website. Out of these cookies, the cookies that are categorized as necessary are stored on your browser as they are essential for the working of basic functionalities of the website. We also use third-party cookies that help us analyze and understand how you use this website. These cookies will be stored in your browser only with your consent. You also have the option to opt-out of these cookies. But opting out of some of these cookies may have an effect on your browsing experience.
Necessary Always Enabled
Necessary cookies are absolutely essential for the website to function properly. This category only includes cookies that ensures basic functionalities and security features of the website. These cookies do not store any personal information.
Non-necessary
Any cookies that may not be particularly necessary for the website to function and is used specifically to collect user personal data via analytics, ads, other embedded contents are termed as non-necessary cookies. It is mandatory to procure user consent prior to running these cookies on your website.
SAVE & ACCEPT

Check out our online investment course

New E-Book:
Our 10 favorite dividend stocks in the Nordic Region

The Nordic region gets lots of coverage for its welfare models.

Perhaps lesser known is that its stock markets have performed really well over the last 50 years.